A few things have changed for me this month. Adrenaline Rush doesn’t have the player pool for me to play it. I don’t want to be playing against the blackpros as they get 100% rakeback and the rest of the field is a few adrenaline rush regs. Rarely do I sit at a table with new players so I’m going to have to let go of that game for right not.

I just started a job working part time for BlueFirePoker. That means I’ve over loaded my mind watching a ton of training videos. That has not only given me back the love for mtts but improved my play. This job is probably the best job in the world for me not a second of it feels like work and hopefully I will end up crushing.

Last night I decided to convert some ftp points I have from playing cash into $26 mtt ticket and ended up chopping the game hu. When we started HU I asked him if he would like to make a deal he had me out chipped 2 to 1 and he said no. Last year I spent a fair bit of time playing hu hypers so once I beat him 10/11 hands and took over the chip lead he came back with EVEN CHOP. LOL. The asshole in me was tempted to say no but I know that more than 40% he is going to beat me and it was almost 3am. 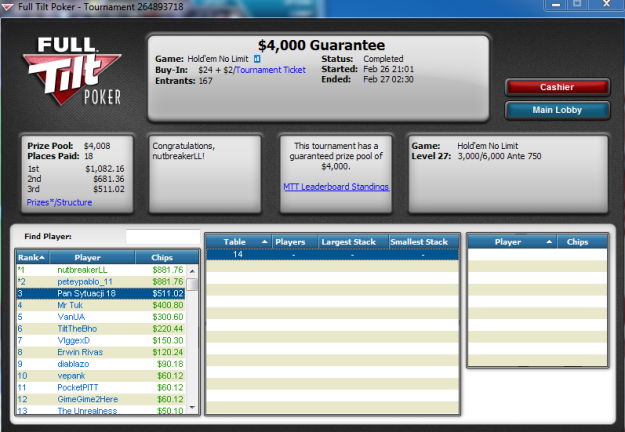 This week I start jogging. I am getting ready to run my first 5k in May. I know that doesn’t seem far but I run funny.